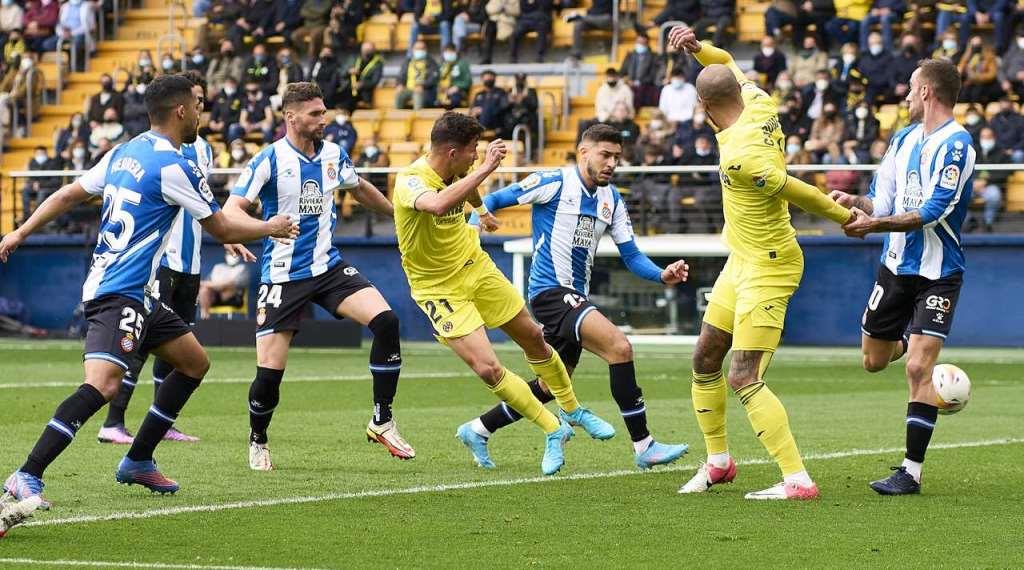 Villarreal decimated Espanyol 5-1 at the Estadio de la Cerámica to extend their unbeaten record to six matches and usurp Barcelona in the top-five.

Yéremi Pino became the first Villarreal player ever to net a La Liga quadruple, with his merciless haul including a ‘perfect’ first-half hat-trick.

After the ‘Yellow Submarine’ had found the net on 29 occasions in their 13 matches at the Estadio de la Cerámica, 19-year-old Pino’s day of destruction began in only the 14th minute.

Acting like a man possessed, he inexplicably outmuscled Leandro Cabrera to head home Pervis Estupiñán’s enticing cross past Diego López from close-range to give Villarreal a lead they never once looked like relinquishing.

Pino would double his tally just seven minutes later, with some execrable Espanyol defending allowed Pino to strike the ball into the bottom left-hand corner.

Few would expect him to be afforded the same amount of time and space many more times in his whole career, but on the stroke of half-time, he was allowed to complete his perfect hat-trick with similarly insulting ease, instinctively following up at the back post to tap into an empty net after Étienne Capoue’s cross-shot had been parried into his path by López.

Gerónimo Rulli remained a spectator of his teammates’ attacking exhibition in the second half’s fledgling minutes, as ‘El Submarino Amarillo’ continued where they left off at the interval, and made it 4-0 in the 53rd minute when Pino added his fourth of the afternoon.

Playing on the shoulder of a beleaguered Espanyol’s defence, the man of the moment exquisitely manoeuvred the ball over an advancing López before stroking the ball into the back of an exposed net.

The 1,400 travelling allocation eventually had something to celebrate in the 65th minute, when Keidi Bare scored his first-ever La Liga goal, composing himself to convert the rebound after Rulli could only palm away Raúl de Tomás’ glancing header into the Albanian international’s path.

Unai Emery allowed Pino to leave the field to a standing ovation in the 75th minute, as the Spanish international celebrated the additional accolade of becoming the youngest-ever player to score a first-half La Liga hat-trick. Substitute Boulaye Dia then completed the rout in the 86th minute, perfectly positioning his close-range strike into the bottom right-hand corner despite the best endeavours of López.

Villarreal have forgotten the definition of defeat, after losing only once in their last 11 league matches, as the ‘Yellow Submarine’ continue to navigate their expedition of successive back-to-back UEFA Champions League engagements next season.

Meanwhile, Espanyol’s struggles away from their home comforts of the RCDE Stadium continue, with the ‘Parakeets’ registering only a solitary away victory in 13 league encounters this season.

Cagliari climbed out of the relegation zone with a hard fought victory over Torino. Match Review 02/27/2022