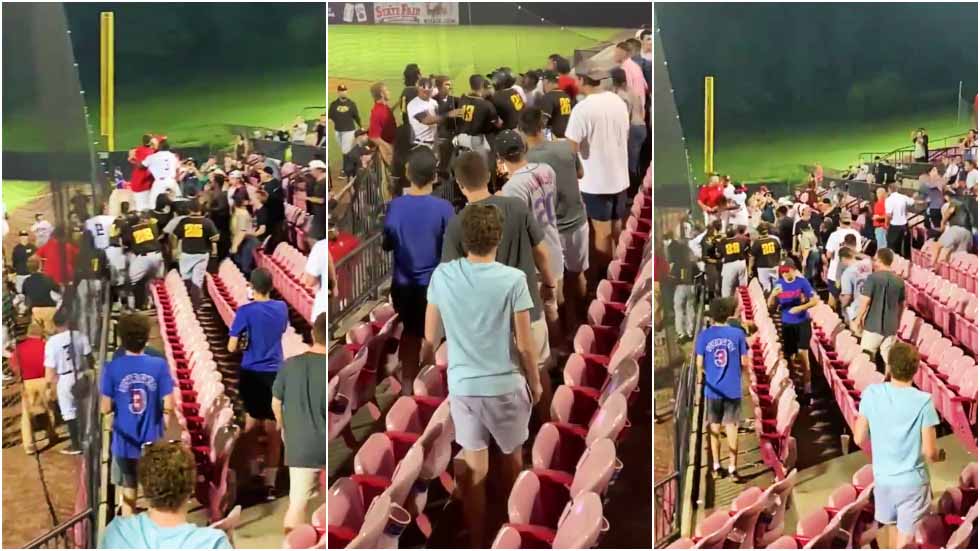 A professional baseball game in New Jersey threatened to turn ugly on Thursday after players from both teams stormed the stands to confront supporters after a player was allegedly showered with beer by a fan.

The incredible scenes took place at a Frontier League game in Little Falls’ Yogi Berra Stadium between the New Jersey Jackals and the Sussex County Miners and led to a brief pause in the game, with officials scrambling to calm proceedings after tempers had frayed after an unnamed player had a beer dunked over him during the game – on what was $1 beer night at the ground.

Footage of the incident was subsequently posted to social media, showing several players running into the stands to confront fans, stopping short of throwing punches.

Fortunately for all involved – in particular the fans – officials were able to keep a lid on the kerfuffle before any real damage was done, with play resuming shortly afterwards.

The drama wasn’t entirely confined to the stands either, as the Miners wound out on top in a remarkable game by a score of 15-14.

While this one didn’t fully escalate, the situation threatened to be a repeat of the infamous NBA brawl between the Indiana Pacers and the Detroit Pistons in 2004, which became known as ‘The Malice in the Palace’.

On that occasion, several players also stormed the stands to confront fans after a beverage was thrown at a player – but this time several punches were thrown, leading to the league imposing bans on nine players totalling 146 games and $11 million in cumulative fines.

“A literal ‘Malice in the Palace’ style brawl between players and fans in the stands of the NJ Jackals game just broke out while [Frank Fleming, Barstool Sports reporter] was judging a hotdog contest on the other side of the stadium,” wrote the video’s uploader online.